Tor Lundstrom and the Beyond Medals crew define 21st century creative snow sliding. Building on the Goliath’s versatile and powerful platform, our collab model adds a fr esh graphic and toughened base for jibbing the crap out of park obstacles, natural features and street set-ups. Beyond sick!

Softer snowboards are easier to press and won’t kick your ass if you make a mistake. Stiffer decks are more stable at speed and super responsive edge-to-edge. Choose your poison.

What’s this board’s natural home? Full send in the park? Elbows down on the trails? Or chucking roosters somewhere off grid?

Our three-way weave of fiberglass is light, strong and responsive. We use this to beef up the flex pattern.

Our very light 70-30 paulownia and poplar wood blend for an unparalleled strength to weight ratio.

The type and placement of fiberglass greatly influences a board’s flex and riding characteristics. Boards are built with a layer of fiberglass above and below the woodcore.

Not a basic extruded base. It has the highest molecular content available for an extruded base. That means it’s super slick, durable and maintenance-free.

Producing two or more base color options minimizes p-tex waste. That is why you will find flip flop base options on most of our die-cut bases. This means orders can be filled with either color option which makes environmental sense.

Triple Base Technology™ is awesome. The lifted sidebase areas at the widest points of the board make a lot of sense. The boards turn smoother and faster and it helps when you are not completely clean on your landings.

SideKick™ dramatically increases the sidebase uplift at the widest points of the nose and tail. This makes turn initiation even smoother, increases float in powder and handling of the board in rough terrain.

SuperTubes™ are hollow carbon core upgrades that are inserted into the core in 3 different configurations. The hollow carbon tubes greatly increase the woodcore’s pop and reduce weight.

Not sure of the best size board for you? Give us your boot size and weight and we'll let you know. If you're still not sure, you can contact an expert for advice anytime here.

This board is tons of fun to ride. Perfect stiffness, shreds the entire mountain. 3BT helps with all the random stuff Im trying to do while up there. Amazing!

A
Adam Tice
Fun board!

Great board... can't wait for some powder now. Love the shape!

m
mc Donald
This board is for absolute Chads

Board is SICK ! no stickers = not so SICK !
but my heart is not broken <3
overall rating: buy it

and restock your snowproof hoodies.

Absolute gorgeous board. Great for pow and park, had so much fun on this board. I am a girl who is 174cm tall, the 153cm is perfect for me. I really truly love this board a lot. 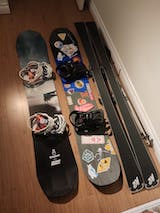 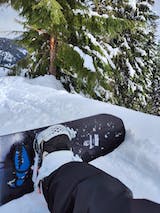 So... this is the best snowboard I've ever ridden. Nitro Team Pro. Destroyed. Ride Algorythm. Good board, but still.. DESTROYED! I even bought an ET and I gotta say. DESTRYOOOOOYED. LOL. But really, this is the closest thing to a quiver killer I've ever found. The Goliath is wild. The above average side cut gives it a nice effective edge that's maneuverable at all speeds. The 3BT with Uplift gives you the benefits of full positive camber but because of how the board rolls over the 3D base, it allows the whole edge to engage without feeling catchy. Full camber butter when you want it, edge hold no problem. Also the 3BT is great in pow and slush because it funnels snow out like the hull off a boat but it's wide enough/ flat enough so that you still have a good platform for butters, ollies, etc... The flex pattern on the Goliath makes it stiff enough to rip but forgiving in rough snow. It could be more damp but if you're good at keeping your kness bent and can ride with power, you're fine. Honestly if they gave it AirRide (their dampening tech.) it would be nearly perfect IMO. Good jump board as well and it can and will jib but the Evil Twin is a better option in that respect.

44 reviews
$720.00
A giant of the all-mountain game.The Goliath is firmly established as a classic within the Bataleon range and an industry-wide best seller. Its balance of freestyle agility and freeride power...
Sale Sold Out

24 reviews
$540.00
Fun times every time.The Fun.Kink is the epitome of a modern go- anywhere shape. It’s super accessible, with a mellow flex and relaxed camber that encourages riders of every level...
Sale Sold Out

21 reviews
$600.00
Down for anything.Our best-selling quiver killer features a progressive new shape for this season that squeezes out even more versatile performance. We kept the twin profile and updated it with...
Sale Sold Out

9 reviews
$480.00
Locked on progression.Our unparalleled experience with 3D shaping has enabled us to develop a supremely capable all mountain board at a competitive price point. Its mellow flex and Triple Base...
Sale

10 reviews
$850.00
Go big or go home.Taller riders and dudes with big feet are often lumped with heavy planks; the Stallion bucks that trend. It’s a super-sized version of the top-of- the-line...

This is an approximate conversion table to help you find your size.

NOTE: these are approximate times only.

You have successfully subscribed!

Please login and you will add product to your wishlist